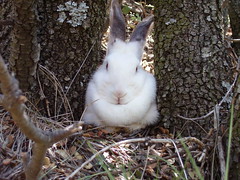 Living in rural Spain, speaking the language as a 5 year old child might, not knowing how a range of things are done – from de-registering a car after you’ve rolled it down a 20 foot bank and written it off to figuring out how to book a train ticket from Bordeaux to Barcelona – it’s important to get used to the fact that things often don’t go as you think they should. Expectations are frequently confounded and Spanish people generally seem helpfully relaxed about this, shrugging their shoulders and saying ‘no pasa nada’, a sort of ‘oh well, never mind’. Having tried – until now unsuccessfully – to get email at home in the mountains for 9 months, involving at least 10 visits to the Vodafone shop alone, I am very familiar with ‘no pasa nada’ and its sister phrase ‘no te preocupas’ (as Vijayasri’s Scottish Granny used to say “dinnae fash yoursel’”). One starts to relax with the unexpected and surprising.

But even so these surprises still come on a regular basis and as I was driving back slowly back along the 25 minutes of our dirt track at 11 o’clock at night – following an enjoyable 2 hours watching England play Sweden to a fairly satisfying draw – I had a minor ‘Alice in Wonderland’ experience. I was keeping my eyes peeled to the road partly because I was still regaining confidence driving after our car accident the month before and partly because, with an average of 3 vehicles a day passing, interesting animals such as genet cats, red squirrels, badgers and wild boar can sometimes be seen on the track.

But this time sitting completely still on the side of the track at its narrowest point was a large white rabbit. It sat under the light from my headlamps. I got out of the vehicle thinking the rabbit would move as I got closer but it just shook a little and eyed me timidly. With a steep drop on the far side of the road I didn’t know if I could get the vehicle past it. Also, I wasn’t sure I wanted to leave it there. Something wasn’t right. We were in the middle of nowhere and here was a large, distinctly domesticated-looking rabbit trembling and peering up at me. I gently picked it up thinking it would resist but it lay shaking in my arms. As I held it I thought about what to do and where it might have come from.

It could have been a child’s pet living in the local village but that seemed unlikely. There are a few households with cats in Peñarroya and that is fairly unusual. Spanish people are not big on pets, with the exception being dogs and even then you’re more likely to see them abandoned on the roadside. On the other hand the vultures feeding ground was about a mile further up the track. Perhaps they transported the rabbits live and killed them at the in situ. Had Bunny somehow escaped or fallen off the lorry? He seemed strangely docile as if he was a bit stunned. The third alternative was that he might have escaped from one of the local rabbit farms – but it seemed a long way to come especially for such an inert being. He didn’t look like he was up to hopping through at least a mile of steep mountainside.

So – what to do? I put him in the car, again expecting him to come to and start scrambling to get free and I would happily watch him revert to normal rabbit behaviour and wave goodbye as he disappeared into the undergrowth. He didn’t. He cowered on the seat and wee’d on my handbag as I drove the remaining 6 kilometres extremely slowly so as not to bump him around too much. It was after midnight when I got home and the house was completely dark. For some reason I felt vaguely naughty tiptoeing through the house with him. I put him on my bed while I worked out what to do with him and he promptly wee’d again and shook more violently. He obviously wasn’t happy inside and seemed frightened and in shock. So even though I knew he was at risk from the foxes outside I put him in a more natural environment with a couple of carrots and a lettuce leaf and went to bed.

In the morning I looked for him before morning meditation but I couldn’t see him anywhere around the house. I assumed he had hopped off. 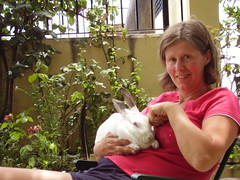 But then Vijayasri rushed around the corner “guess what I’ve seen” – and I did!

Over the next few days he settled in, we made him a cage for overnight and he hopped a few paces to the nearest bit of shade during the day. He stayed close to the house sometimes going back to his cage after only being out for half an hour. He became ‘Moksabunny’ (or Bun most of the time) Moksa meaning freedom, to celebrate his breaking out from wherever he’d come from. He moved slowly and in an ungainly way with a hint of a limp. His bottom was big and square as if he sat on it too much and we joked about his unatheleticism until we started to put together the most likely scenario of his previous home.

The local rabbit farms are huge. Up to twenty thousand rabbits in each farm and conditions are often extremely cramped and poor. Rabbits will tear out their own fur to try and create a nest for the young that are born after they have been artificially inseminated. We were told that if an animal escapes it is unlikely to survive for very long as its body has got so dependent on the high levels of antibiotics and hormones put in its feed. Plain grass could give it diarrhoea. They are transported live in tiny cages to the local abattoirs.

Certainly Moksabunny’s appetite was small though he seemed fond of carrots and the dried food I bought for him. Gradually we watched him emerge from shell-shock into a more dynamic being with a distinctive personality. His limp turned into a more rabbity lollop. He took to grunting and stamping his back legs in something approximating a temper tantrum when I tried to pick him up. I’m familiar with rabbits from having kept them as a child and I took a lot of pleasure in looking after him and his big fluffiness. I felt moved by contemplating the suffering that had been his lot and was still the lot of thousands of others like him. As many times before I reflected how glad I am to be a vegetarian and not contributing to an industry that cages and kills animals to feed me.

After his early life I was very keen that we let him have his freedom. But as he roamed further and became increasingly adventurous in exploring holes in tree trunks, groves of trees and the rocky mountainside he was at more at risk of becoming a foxes dinner. It was clear he needed a more permanent home. Jokingly I mentioned our dilemma to some friends recently moved to Valencia province from the UK. “Oh yes, we’ll have him” they responded immediately. Followed by “the cats won’t eat him will they?” Two English moggies? I was confident Moksabunny could hold his own.

On the morning we left for Valencia I looked out of my bedroom window and saw a pale, slightly scraggy fox on the terrace 3 metres away. He looked from Moksabunny’s cage into my window and then slunk off as I pursued him with my camera. Bun was leaving just in time.

He didn’t enjoy the journey that turned out to be a six-hour scenic route through stunning parts of almost deserted Teruel. He cowered and grunted as I tried to reassure him by stroking him or offering some water. But the next day on a shady terrace full of potted marigolds and carnations he found some nice things to eat and perked up a bit.

Two weeks later I hear Moksabunny is doing fine. His lives in a large fenced orchard with olive and fruit trees. There is grass and shade with an enclosure for overnight. He is becoming more lively and increasingly hard to catch to put away in the evenings. He may not have a long life ahead of him but I am very glad he has had a taste of a better life and a bit of bunny freedom!

This entry was posted in Moksabunny, Vajradevi writes. Bookmark the permalink.