Akashavana is the women’s ordination retreat centre of the Triratna Buddhist Order. Our retreats are only for women ordained into the Triratna Buddhist Order or for women who have been invited to attend an ordination retreat here. The centre is located in a remote mountainous region of Aragon in Northern Spain, and maintained and run by a small community of women living nearby.

On a working retreat in November 2021, which included women from Mexico, Germany and the UK, a stupa was built at Akashavana, containing the ashes of Dhardo Rinpoche, one of Sangharakshita’s main teachers. 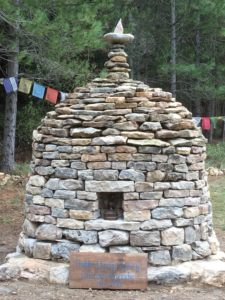