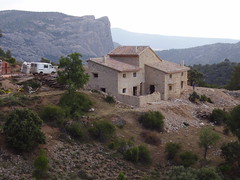 The retreat centre has a roof! Amazing the difference a roof can make, transforming a building site into a viable building, with outdoors and indoors. And it has guttering! I never dreamed how excited I could get about guttering, but ours is special guttering, made of softly gleaming copper.

All the exterior stonework is pointed now, so that old blends into new, and at our request the builders left some of the old blue colouring on the wall. The pigment is called azulete, in fact the same thing as used to be used in Britain for whitening the wash – ‘washing blue’. The Matarraña traditional was to mix azulete with cal (lime whitewash) and paint the walls an intense sky blue. It was often painted around exterior doors and windows, we’re told, to keep the evil spirits away. We found an old sack of azulete from the previous owners in the house – it had been there since the1960’s but still looked usable, so we will be experimenting with our own spirit protection. I especially like the casual way this was done, just slapped around a window, no particular worries about neat edges.

Downstairs the workmen have been digging out bedrock with pneumatic drills. All the dormitory rooms now have been dug out, taking down the floor level so that you don’t bump your head on the ceiling beams any longer. But in the storeroom area they seem to have hit a particularly hard part and José our builder was clearly reluctant to keep expending effort on what was only to be a storage area. It’s too hard, demasiado fuerte, he complained. Vajradevi kicked it and some crumbled away. ‘OK, you keep kicking it, Vajradevi,’ I suggested.

Now the hot weather has really set in, and working outdoors can become intolerable in the middle of the day. The Brazilian workmen drive from Morella, a town 50km away to come to work, so no chance to go home for the afternoon siesta. Fortunately there is plenty of work indoors, preparing the walls for plastering, concreting the floors downstairs. Thick stone walls keep the interior of these old houses pleasantly cool in the fiery heat of summer – another reminder of how well suited the traditional building methods are to the climate.

So, all goes well, and our main discussions with the architect and builders now centre around the services – water, electricity, heating. The man with the maquina (digger) will be coming up this week to dig out the spring, now that the moon is full – the ‘buena luna’ that draws out the water, according to local tradition.

This entry was posted in Building updates. Bookmark the permalink.